I attended the NW Great Teaching Seminar this week and it was life changing. This seminar is part of the National Great Teachers Seminar Series. It lasted five days and was held at the amazingly serene and picturesque Menucha retreat in Oregon's Columbia River Gorge.  There were over 30 other seminar participants!


All attendees teach at community colleges, but come from various disciplines. Based on the premise that the real experts on teaching are those who teach, the seminar was led by five amazing individuals: Linda Gerber, Phil Corliss, April Fong, Doug Dickson and Jan Woodcock. Following a "flexibly rigid" format, meals were held at 8 am, 12 and 6 pm daily; the rest of the schedule revolved around these times.


Humor, experience, practical knowledge, active engagement, integrated learning and game-centered teaching made this seminar a life-changing experience for me.

Exchanging these writings, we broke up into smaller groups and discussed the innovations and problems, using a Socratic questioning method designed to help the individual sort it out on their own. These papers create a great pool of knowledge, solutions and inspiration.

Emerging themes (throughout the rest of the seminar) -- themes that arose the first two days as we went over the Innovation and Problem papers.

Large group discussions: giving teachers a chance to obtain crowd-sourced answers to questions.
I learned something, literally every two minutes, i.e., teaching students to nod their heads, maintaining student boundaries when it comes to classwork and the importance of trying new things and not being afraid to change it up. Many common solutions, tips, and other techniques carried over from one discipline to the next.

I was struck by the common love and passion for teaching and helping others held by the entire cohort. It was a positive, supportive, and stretching event for all involved.

Learning opportunities also consisted of small and large group communication and crowd-sourcing answers, games, interpretive dance along with time for recreation and building rapport. Recreation included hikes at Multnomah Falls and surrounding area, bike riding, reading and writing, etc. The meals were fabulous. All in all, this was one of the best learning experiences I have ever had. I was pushed out of my comfort zone, which in turn, created fallow ground for greater learning.

I highly recommend this seminar for educators. The Great Teacher Seminars are available throughout the country.

“The National Great Teachers Movement is called a ‘movement’ because it is not associated with, nor does it constitute a corporation or an organization of any kind. Thus, it serves no institutional or commercial interests. There is no headquarters or address, and there are no officials, owners, employees or politics. There are no manuals or handbooks, only a few simple guidelines [Editor’s Note: This web connection created by Steve Smith after the 2nd GT colloquium in 2001].

Everything is passed on by oral tradition in order to prevent the development of any form of true believership or fixed procedure, which might come to be followed to the letter and of which the educational profession would soon tire. The many annual Great Teachers Seminars throughout North America, and now in several foreign countries, exist and persist only because of the initiative and selfless ambition of people who want to share the experience with teachers in their own geographic area.”

An Introduction to Library Technical Services

An introduction to Library Technical Services slideshow that went with a job interview teaching session I had to give.

It was for a basic introduction to library services class.   The scenario was that we had already covered circulation.

The presentation was very short--like 20 mins.


Here is a link to the notes for this session:

https://drive.google.com/file/d/0B9_AI2rqzHHAMl9mTTA0M0JUWUdRWTRYaWdIbzBjdw/view?usp=sharing
at June 13, 2015 No comments:

It isn't just getting people the MLS, or MLIS 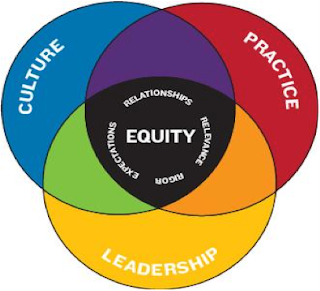 It isn't just getting people the MLS, or MLIS.  I've had mine since 2009 and it hasn't done me much good.  Libraries, the ALA and Education is not really interested in equity, inclusion or diversity,  If they were, then they would put their money where there mouths are and make it a priority.  I have been working in libraries since 1987 and personally have not seen a change in representation.  I also have numbers that prove the field has become less diverse.

I think working together is the way to go, but I also think acknowledging "whiteness" and the privileges that go with it is an important step toward working together.  I'm not even White and I benefit from these privileges because of my lighter skin. I know I have more opportunities (generally) than my darker brothers and sisters. And god forbid they have an accent.  It isn't that hard to acknowledge the privilege--yet people constantly fight this acknowledgement.


We all benefit from the slavery, land-theft and genocide that occured and continues to occur in the Americas.  Even the poorest people in our culture have a higher standard of living because of the slavery, land-theft and genocide that has happened and is still ongoing.  It isn't hard to see this and acknowledgement is the answer.  Nobody wants anybody to feel bad, but we want acknowledgement.  I liken it to an alcoholic who is in deep denial.  Things won't ever get better until one can acknowledge one has a problem.
at June 10, 2015 1 comment: