Book Review: An American Genocide: The United States and the California Indian Catastrophe, 1846-1873 (The Lamar Series in Western History)

An American Genocide: The United States and the California Indian Catastrophe, 1846-1873 (The Lamar Series in Western History)by Benjamin Madley is a book that should be in every library in the US.  This book covers an essential history that has heretofore been neglected save for a few works such as Murder State.


The book covers the history of the genocide of Indigenous peoples in the state of California from 1846-1873.  During this time, the book traces the beginnings of the genocide from scattered massacres to full scale state and federally sponsored militia and military massacre campaigns.  The sheer brutality and callousness against the indigenous people of California is stunning and hard to read.
This book shows how the pattern of forcing Indians from their home hunting grounds and by the removal of game due to large numbers of immigrants--beginning during the Gold Rush.  The indians then could not feed themselves, so they stole cattle from White ranchers.  The White ranchers would then raise a posse, or a militia force to go "teach the indians a lesson."  The lesson would entail murdering every man, woman and child of the first indigenous village happened upon.  No matter if they were 'guilty' or not.

The combination of vigilante massacres with state sponsored militia killing campaigns and the military murder expeditions was lethal and decimated the Californian Indian population.  The Indians had nowhere to hide except high in the mountains, where there was little food.  This forced them to steal from White people, which led to more murder expeditions against them.  It was a cycle that was lethal and effective in 'eradicating' the indigenous people of California.

If you were lucky enough to survive a massacre, you would not have any food, clothing or shelter to help you live.  Many survivors died from exposure or starvation.  As I was reading this, I thought of Ishi--his story is heartbreaking.  You can read about it here: http://history.library.ucsf.edu/ishi.html.


The killing was relentless.  The Indians sometimes fought back and killed whites, which raised even more ire and retribution.  The murder unmerciful and was encouraged by California Newspapers.  These papers called for total annihilation of all Californian Indians.


You may be thinking, "Why didn't the Indians just go to a reservation.  When Indians fled to reservations starved the Indians.  They didn't provide the promised supplies.  Many starved to death.

This brought about the horrible choice of leaving the reservation and facing:

Enforced slavery.  There were vagrancy laws that stated an Indian had to prove they were not in debt to someone.  This entailed the possession of a certificate that stated they were not in debt.  If the Indian could not prove this, then they were arrested and put up for auction.  They were sold to someone for a period of time, usually years.  During this time they were charged for food and clothes and were never paid enough money to pay off this debt.  Therefore, they could never get their certificate of no debt.  They would be stuck in perpetual slavery. 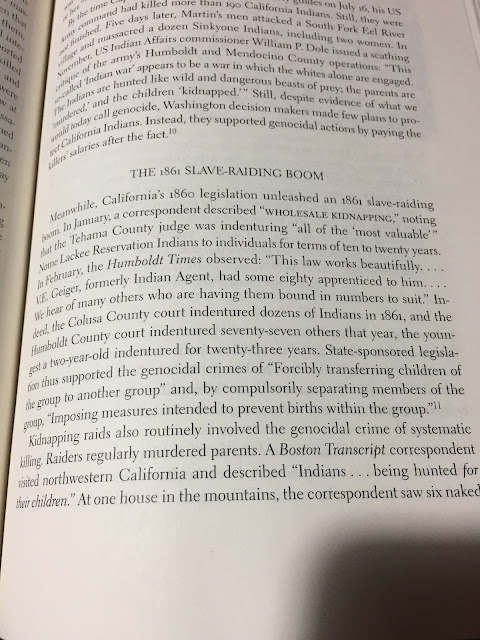 Being tracked down and murdered by a posse of citizens or a state sponsored militia.  After a theft, they would hunt down and kill any Indian they encountered.  They used this as a chance for "pedagogical violence."  Violence that would teach anyone who heard about it that they should not steal from White people or they would face utter annihilation or slavery.  They often collected scalps and brought them back as souvenirs.  Some local country stores had Indian scalps nailed to their walls well into the 20th century.


The state paid well for militiamen to track down and murder Indians in CA.  They they sought reimbursement from the the federal government.  The federal government paid for the genocide of California Indians and it paid well.  This pay, in itself, was a reason to form a militia and make some money.

Sometimes the children and women were kept alive, but sold into the california slave system.  Women were sold into sexual slavery and other forms of bondage.  Children were often sold to estates where they remained the rest of their lives as chattel. 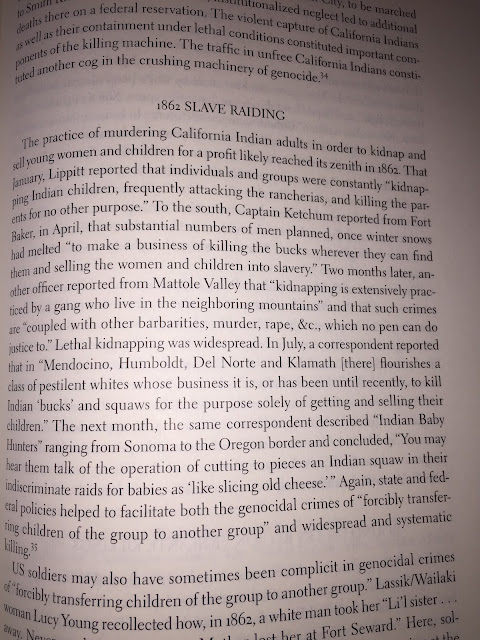 Some Indians turned to gold mining when their territories were impinged upon. Once there was an influx of White immigrants into CA though, there wasn't enough for everyone and the White miners simply murdered the Indian miners and claim jumped their claims.

There is a timeline at the end of the book that tracks the murder of indigenous people in CA according to state historical record that includes body counts.  This is the most well-researched and comprehensive information on this subject to date.

US genocide has yet to be covered in any manner similar to the Holocaust in Europe.  The time is coming though.  The cat is out of the bag.

Other important books on this subject:

Whiteness in US Libraries


[Note--this is a blog post.  These ideas can and will be further developed.  These ideas are sketches of what I am thinking at the moment.  Feedback is encouraged and welcome.]

US schools and libraries serve as points of diffusion for Whiteness.

Whiteness, as used in this post is defined as the concept that European people and European culture are more important than other people and other cultures.


Whiteness is purveyed uncritically in libraries.  This shucking of Whiteness is done under the guise of objectivity, of adhering the the 'marketplace' of ideas.  But this so-called neutrality is really an adherence and capitulation to the Whiteness paradigm.

Children of color hear the message of Whiteness--"European people and European culture are more important than other people and other cultures.

I don't say this lightly.  Whiteness is embedded in our culture.  From the shapes of the buildings, to the hierarchies of the library staff and administration.  This is especially true in the American Library world. Ethnic categories, demeaning classifications, cataloging systems with names like the Anglo American Cataloging Rules, and staff who (too often) don't look like the people who live in the neighborhood.  Microagressions, discrimination, hiring bias and collections centered around Whiteness all are outcomes of the ubiquitousness of  this paradigm in our libraries.

These immigrants and their descendants committed genocide against Indigenous peoples throughout the Americas.

The wealth of the Americas, in large part, was created by slave labor. This slave labor was both African and Indigenous.

Whiteness says that this is okay, that this is correct and that it is justified. Those who adhere to Whiteness also believe in these fundamental principles.  Mostly, the information found in libraries says it is okay, natural and normal, or does not bother to address these issues...

Whiteness, brought from Europe has been part of US Educational system from the beginning.
Children are inculcated with #Whiteness via books, lectures and the culture of US schools.
Some children become authors, scientists and other types of academics.  They produce information and knowledge in the form of books and other types of media.

The knowledge, which too many authors, scientists and academics create is fundamentally flawed with Whiteness embedded within. Even if the creators of this knowledge are people of color. They are working with tainted information that has not been fully analyzed from a cultural perspective. This lends itself to embedding Whiteness in all new knowledge created from this information. This is why we have seen no real advancements, even with the educated people of color. They exist within and are heavily influenced by Whiteness. Libraries serve as key distribution points for culturally biased information.

One example is historic documentation Thomas Jefferson, as a land-owner and slaveholder, is understood to be a rapist. He took advantage of his position and raped his slaves, yet he is still hailed as a hero still. This is Whiteness.
Technology in libraries needs to be reexamined with a critical eye. Embedded Whiteness prevails. Metadata, algorithms and other location tools are just as infected with Whiteness as the rest of the library world and larger American Educational culture. This issue is particularly pertinent as we transition into a more digital information world.

The idea that White people, European Americans are more important, smarter, better, stronger, more worthy, and that their culture is superior is embedded in most of the books in US libraries. People check out these books and are then influenced by these books. And since most of these books have the message of Whiteness uncritically embedded in them, the reader is most often influenced by Whiteness without giving it the critical eye it deserves.
This is how libraries serve as points of diffusion for Whiteness paradigm.
at October 23, 2016 6 comments:

This is a video I created (with help from the school's video production team) for my introductory Information Literacy class. It was meant to broach the subject of Culture and Information Literacy. It can be used to generate a discussion or as a reflection writing assignment catalyst. I would LOVE feedback on this please.
at October 13, 2016 2 comments: